Ten Questions for Honolulu's Next Chief of Police 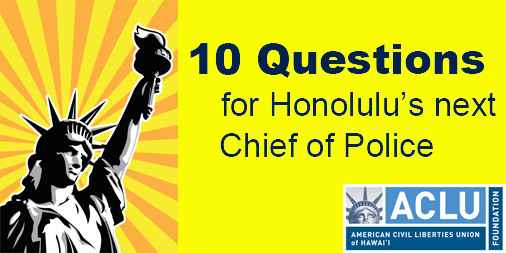 5/15/17 VIA CERTIFIED MAIL AND ELECTRONIC MAIL

Re: Ten Questions for the Next Chief of Police
Dear Chair Sword, Vice Chair Thompson, and Honolulu Police Commissioners,
The appointment of a new chief of police marks a turning point in the City and County of Honolulu as it is a unique opportunity for the leadership of the Honolulu police to regain the trust of the people they serve. In turn, nothing will determine such trust more than the next chief’s commitment to civil rights and civil liberties. For this reason and to aid the Commission in making this important decision, we are writing to request that you pose ten questions about civil liberties to all candidates for the position of police chief. The answers to these questions will hopefully not only inform the Commission’s decision making, but perhaps more importantly, will also define the department’s relationship to the public moving forward.
In creating the police department, the Charter for the City and County of Honolulu establishes “a system of law enforcement which shall be based on due regard for the constitutional rights of all persons, which shall promote the highest possible degree of mutual respect between law enforcement officers and the people of the city and which shall provide for the expeditious apprehension of those who violate the law.” Revised Charter of the City & County of Honolulu (the “Charter”) § 6-1602. Thus, the Charter explicitly provides that purpose of the department is not just, or even primarily, to judiciously enforce the law, but to do so with due regard for constitutional rights and respect for the people of Honolulu.
The chief of police is the administrative head of the police department and as such, is tasked with carrying out the Charter’s mission of preserving public peace while respecting the public’s constitutional rights. Neither the Charter nor the Revised Ordinances of Honolulu lay out with any specificity how the chief of police must carry out these goals, leaving the promulgation of rules and regulations, and the training, supervision, and appointment of personnel primarily to the chief of police. Charter § 6-1604. Given that the police department has almost exclusive authority and discretion on the lawful use of force in Oahu, carrying out these duties is an awesome responsibility that no chief of police should take lightly.
The general public in Honolulu does not have a direct say in selecting the chief of police. Instead, as an added layer of independence, this responsibility rests with your Commission, which can appoint and remove the chief of police for any reason. Charter § 6-1603. In traditional legal terms, this means that the chief of police serves at your pleasure and that you are ultimately responsible for ensuring, on behalf of the public, that the chief of police is properly carrying out the department’s mission of maintaining the peace and respecting the constitutional rights of the people of the City and County of Honolulu.
As our community faces enduring and new challenges, the role of the new chief of police in helping or hurting each individual’s fundamental rights under the Hawaiʻi and United States constitutions cannot be overstated. The new chief will need to ensure that the people’s right of free speech and the right to protest are respected. The new chief will also play a key role in guaranteeing the rights to due process, counsel, remain silent, and being secure against unreasonable searches and seizures. As military-grade equipment and more intrusive surveillance tools become available, the new chief will decide whether and how the police department should use these tools. Similarly, as police body camera programs are adopted, the chief will decide on the final procedures and rules that will ensure both transparency and accountability. The new chief of police will also need to decide whether and to what extent the police department will cooperate with the Trump administration’s priorities, such as drug and immigration enforcement, to the detriment of local priorities, such as community policing, law enforcement assisted diversion, and drug treatment. Finally, the new chief of police will set the culture and enforcement priorities of the department and, thus, ultimately be either part of the problem or the solution in addressing prison overcrowding and the overrepresentation of Native Hawaiians, the homeless, the poor, and other minorities in our correctional system.
For these reasons, the appointment of a new chief of police is a powerful moment for rebuilding the trust in the police department’s leadership and mission. To ensure the next chief of police understands and is committed to respecting civil rights, we ask that the Commission pose the following ten questions to all candidates for the position:

While not comprehensive, these questions will hopefully begin a conversation about the role of the police in protecting civil rights that will help the public regain their trust in the police department’s leadership and mission. We also hope you will take into consideration not only the candidates’ answers to these questions, but also their past actions and proven commitments to protecting civil liberties. In our experience, actions speak louder than words.

The ACLU of Hawaiʻi remains a resource to the Commission for any additional information you may need on these matters, including model policies, best practices, and procedures. We will continue to monitor the police in our role to defend and preserve the rights and liberties guaranteed by the Constitution and appreciate your attention to the important issues raised in our request.

[3] The Hawaiʻi Legislature recently appropriated funds for a law enforcement assisted diversion (“LEAD”) pilot program in Hawaiʻi. See also LEAD National Support Bureau website (“In a LEAD® program, police officers exercise discretionary authority at point of contact to divert individuals to a community-based, harm-reduction intervention for law violations driven by unmet behavioral health needs.”), available at https://www.leadbureau.org/about-lead. The ACLU of Hawaiʻi is part of a coalition led by the Chow Project trying to bring this pre-arrest and pre-booking diversion program to Hawaiʻi. See The Chow Project website, available at http://www.chowproject.org/lead.html.

BROAD COALITION OF OVER 100 ORGANIZATIONS, OFFICIALS, AND...

Advocacy at Home During COVID-19

COMMUNITY ADVOCATES, ORGANIZATIONS, AND OFFICIALS CALL ON THE CITY...

Voting In Hawaii With a Criminal Conviction