Honolulu, Hawai‘i: the ACLU of Hawai‘i (“ACLU”) has released a study showing that almost half of the people in Hawai‘i jails are pre-trial detainees who have not been convicted of the crimes for which they've been accused. This preliminary report, called “As Much Justice As You Can Afford – Hawaiiʻs Accused Face an Unequal Bail System,” also reveals that the average bail amount in Honolulu for the lowest level felony is over $20,000. This means the primary reason so many people wait in jail for months is because they just cannot afford to get out while waiting for trial. The report is part of an ongoing, statewide investigation and analysis of how bail practices affect our local families and communities.

Legal Director Mateo Caballero said: “Bail is not supposed to be punishment. Bail is supposed to minimize the risk of flight and danger to society while preserving the constitutional rights of the accused. Instead, our early findings show that the way bail is used in Hawai‘i does not serve any of these purposes. Instead, bail practices regularly cause people to waive their rights just to get out of jail. That is unjust and violates the constitution.”

The preliminary report is based on an analysis of six months of public data and interviews with court officials. It captures a snapshot of how bail is used in Hawaiiʻs criminal justice system, typical outcomes for the accused, and how current practices affect overcrowding of local jails like the O‘ahu Community Corrections Center (“OCCC”). An update with a full year of data is planned for late 2018.

Executive Director Joshua Wisch added: “In practice, the way bail works in Hawai‘i means that if you’re wealthy you get out of jail while you wait for trial, and if you aren’t – you don’t. Almost half of the people in Hawai‘i jails have not been convicted of the crime for which they’ve been accused – they’re only in jail because they can’t afford bail. We hope this report will start a discussion about how we can improve this system.”
The report follows ACLU community events in Hilo and Honolulu to discuss criminal justice reform concerns. Among the report’s findings, which have been provided to legislators, the judiciary, and the administration:

Almost 70% of accused who changed their “not guilty” plea to a “guilty” plea did so while in pretrial custody, raising serious concerns for due process, bias, and fairness. 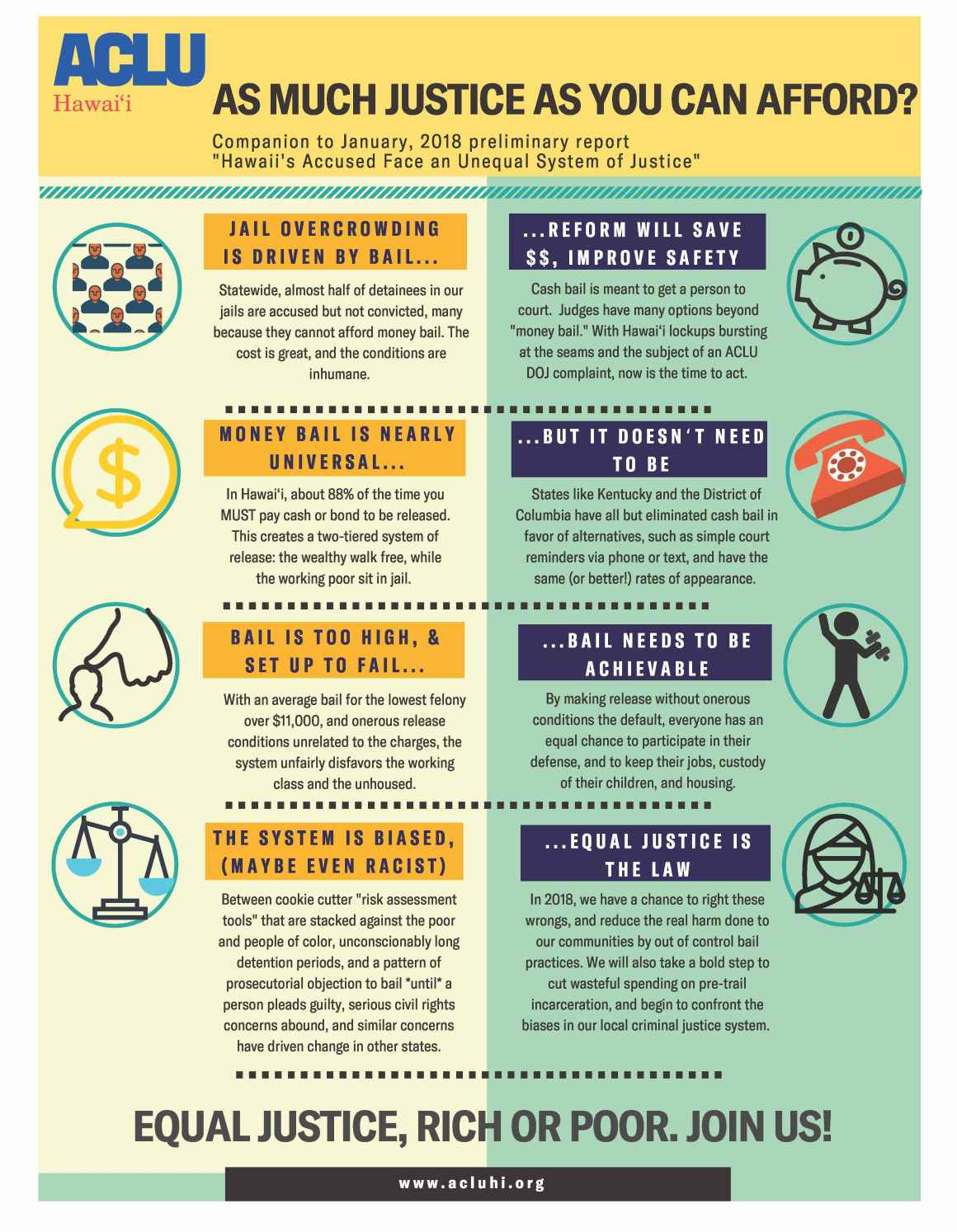